So, a few weeks ago, a friend of mine with more money than sense decided he wanted to buy a project bike.  No problem!  Craigslist down here is filled with such deals and they range from chewed up Kawasaki’s to ragged-out Sportsters.  He called me, likely because I had a truck and ramps, and we were off to pick up his project.  He’d already met the seller the night before and had done “all” his research.  The project was an ancient Yamaha Virago and about the only thing I paid attention to was that it appeared to be a 750.

Anyone who remembers the early Viragos knows they were plagued by starter challenges, so as I reminded my partner, he assured me that he’d looked into it and had a cure readily available.  The train began to run off the tracks when we got to the parking lot where we’d meet the seller.  My first look at the bike on a trailer didn’t give me a lot of hope, but my partner pressed on – he had, after all, resurrected two other bikes and loved tinkering. 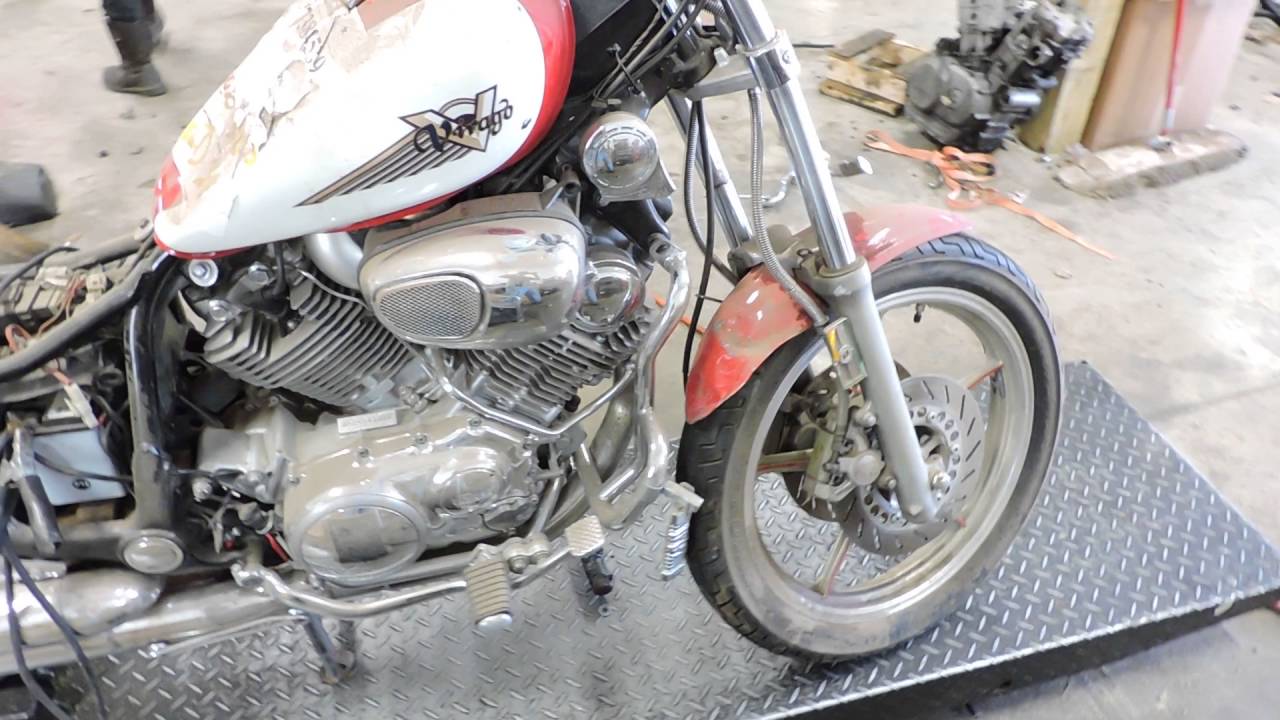 He and the seller went and did their deal on the hood of the truck as I gave the bike the once-over.  It was obvious that Chuck was buying someone else’s project and the “someone else” in this case had taken off far more than he had likely put on.  The pipes were chopped, what was left of the exhaust was wrapped with fiberglass tape and two regular – rusty –  hose clamps.  A sniff of the gas that remained in the tank indicated that whatever was in there had gone bad and, when I voiced my opinion, Chuck simply smiled and explained how he “had it all under control” and the engine had turned over briefly the night before with a shot of starting fluid.

With title in hand, we loaded up the bike and strapped it down.  Half an hour later in Chuck’s garage, we began tearing into the bike.  First to go was the crappy header wrap and that’s when the problems started.  Rust.  A lot of it.

It’s important to understand that this far south, we don’t get snow or ice, therefore, the DOT doesn’t have to use salt on the roads.  As a result, rust is usually only on the surface.

Wrong.  The deeper we got into the tear down, the more rust we found.  What had looked like grime and grease?  You guessed it – it was grime and grease, shielding an ugly coat of rust.  The whole bike was like one big frozen bolt.  We got one exhaust bolt off easily.

We worked for all of them.

The problem, we determined, was that all this grime and grease, which should have worked its way into the nooks and crannies and helped to free up these frozen connectors, had somehow not been doing its job.

And then we pulled the drain plug.

Water – plain, old, dirty water – came out.  Then some particularly vicious looking oil.  By now, Chuck was beginning to worry that he might have made an error in his project bike.

An idea began to form in my head and I reminded Chuck that our area has had three hurricanes hit in the last three years and there had been plenty of flooding in low-lying areas.  Brackish water – a mix of seawater, freshwater, and rain, had inundated a lot of places up and down the coast.

And obviously flooded this bike.

Whoever owned it at the time – the seller?  Someone else? Had decided they couldn’t save it and either mothballed it for a year or two or just never got around to fixing it.  In the end, someone decided to sell it.

Where’d Chuck screw up?  He didn’t do any of the due-diligence you need to do before you buy a used bike – or at least, not the right research.  He knew about the starter problems, but he’d never taken the time to pull the dipstick or look at the bike in good light.  The seller did get the bike to turn over on ether, but in the end, Chuck’s $400 project became infinitely harder because he didn’t insist on taking a harder look at what he was buying.

So now, instead of a fun winter project, Chuck is neck deep in a project from which he’ll never recoup his investments.  He’s taking it in stride, though, and found another parts Virago that had been laid down and put away four years ago … on high ground.  Hopefully, by Spring, he’ll have taken two dead bikes and resurrected one, so in the end, at least one more old cruiser will still be around.