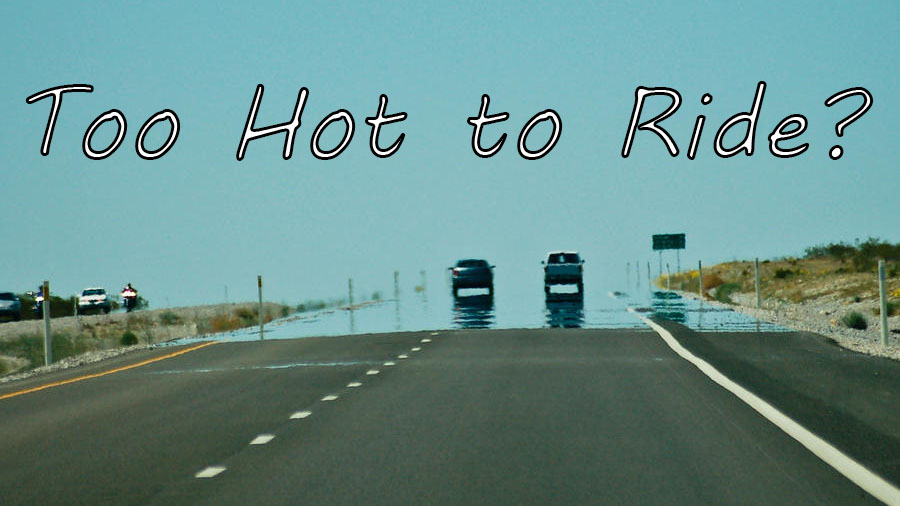 I guess I’m getting old.

For the last few weeks, it’s literally been too hot to ride.

Now, I’m not talking about “hot” the way that a lot of the country has had it – I can well remember a late-summer ride past Joshua Tree in southern California years ago in what was legitimate 100+ temps.  I mean hot in terms of 80-90% humidity and more than ninety degrees.

It’s not that I’m loaded down with gear that’s too heavy or anything like that, it’s just this humidity – it grabs you and doesn’t let you go.  Seriously – you get clammy walking outside, your beard hair curls up, and you just feel like an undercooked steak.  The only cure I know of is October.

Even maintenance starts to not be fun in this kind of heat, despite being in a garage with the fans on and the door open.  I was cleaning up some bad grounds on a buddy’s old Kawasaki two nights ago – at ten o’clock at night, I was still pouring sweat and looked like I’d been wrestling an old Ford FE engine block, not sitting on a rolling seat running a drill motor.

The good news is this – this time of year, the big storms come up frequently, and after a lot of rain, lightning, and general thrashing around, the skies clear, the rain dries off, and the next day is a beautiful one – lower humidity, deep blue skies, and a great day to be on the bike.  Around here in the summer, I don’t check to see what the weather is going to be like today, I check to see when we’re going to have a day filled with rain because I know the good riding is going to take place a day later.

It’s not that I haven’t been riding, but those long hauls that I really love just aren’t that much fun when the mercury rises.  I’ll put on a few miles here and there – running an errand, paying bills, and so on – but five or six hours of beating this heat and humidity?

But while we’re on the subject, if you are one of the road warriors, vainly pushing along in the heat, here’s a few tips…

Down here, there’s plenty of beautiful days to ride, but when the mercury rises, it can make for some tough riding on man and machine.  Keep your wits about you, pick your battles, and keep the shiny side up.