Since we’re all in some version of the Polar Vortex that’s capturing news all over North America – it’s even cold way down here in Georgia – I figured we all might be thinking long and hard about stuff we want to do to the scoots before riding season starts back up.

All three of you guys that read me regularly know that my main bike is an old Sportster that I upgraded the wiring on, but this little “how-to” extends to almost everyone.

Now, sure, older bikes don’t have the electrical system to handle some of the oddball “new” stuff and, at least to me, there’s something wrong about looking at a Shovelhead with LED strips on it. 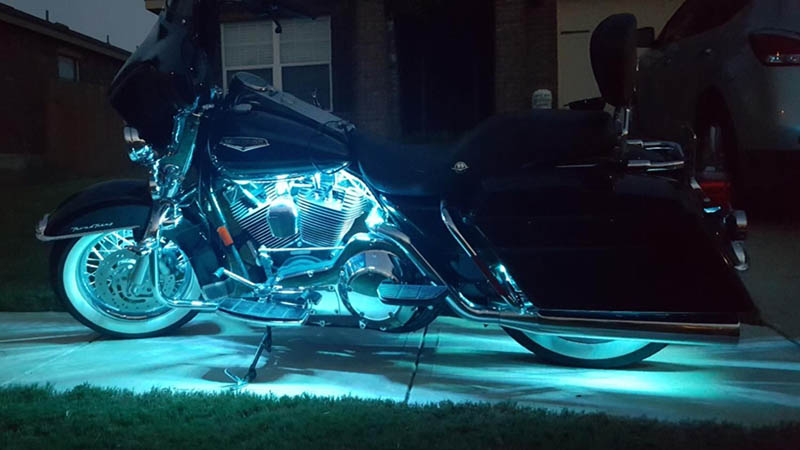 On the other hand, a lot of older bikes can benefit from changing out older incandescent bulbs to a modern LED.   Why?

Well, for starters, if your old stuff has been tucked away in those sockets for 15 years, you’ve likely got some corrosion on the terminals.

Corrosion means you’re creating resistance (and heat) and on older systems, this can begin to tax how much the electrical system can actually put out.  As in dimmer lights.  As in oncoming traffic that can’t see you as easily or cars behind you that aren’t sure if your brake light is on or it’s simply a tail lamp.

The challenge, of course, is that installing LEDs can be a little tricky when it comes to how the blinkers work.  You’ll have to play with some additional wiring to get LEDs to work in a circuit like the turn signal/taillight combo most of us have.  Personally, I’ve cobbled together a system to make it work, but there are plenty available on Amazon and other online vendors to allow you to nearly “plug and play” with LEDs in multi-role lamps.

I’m not going to get into that right now, because the sheer numbers of ways that Harley and everyone else produced and wired their bikes makes it a little too in depth.  Let’s just say, the info is out there and the hardware isn’t expensive, but the logic behind the wiring might make newbies a little nervous, especially if the bank owns more of your bike than you do.

Let’s get back to maintenance and corrosion.

At the very least, now is a perfect time to go ahead and clean all the plugs and connections in your electrical system and, if they have a few years on them, go ahead and swap out the bulbs, too.

To do that, you’ll need a couple things – first of all, some dielectric grease, a brass or even stainless steel brush (an old “GI toothbrush” works great and costs next to nothing), and maybe a couple scraps of sandpaper.

If you’ve never done this before, it might be worth looking at what bulbs you have – Harley used several different types over the years and while you’ll probably be able to buy every bulb you need at the local auto parts place, they’ll almost certainly give you the wrong bulb.  It’s usually better to take the old ones with you and compare bulb numbers in the store.

You can also use the power of the Interweb to buy what you need, but there is often a BIG difference in quality between the cheap Chinese stuff and a quality Western manufacturer.

So to start out, pop the bezel off your light, remove the cover, and unhook the bulb.  If its crusty, swap it out.

Now, use your sandpaper or your brush to clean the contact points inside the socket and on the bulb and you’ll coat them in a thin coat of the dielectric grease.

The dielectric grease, contrary to what a lot of people tell you, does not conduct electricity.  It prevents corrosion – it’s not conductive.  You still need to have good contact between the bulb and the socket.

Where do the LEDs come in?  I use them in license plate lights and the gauge cluster – usually these are 194 or 168 bulbs and can be had in a variety of colors.  For the gauge, I like red, since it doesn’t screw up your vision as much as white, green, or blue.  Your local law enforcement might have some ideas on what your license light can be, but I like a basic white light.

This isn’t going to take long, even for the headlight or the gauge cluster, but it can give you some additional visibility and take some of the load off an already taxed electrical system.

Besides, it gave you a couple hours to play with the bike and didn’t cost more than a tank of gas.