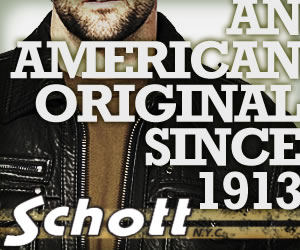 Schott’s heritage is a true-blue, real-deal, piece of Americana. The iconic styles produced by hand for over 100 years have become infused in American culture and have served as battle flags for the American spirit.  Begun by two brothers of a Russian immigrant, Schott NYC originally sold jackets – of all places – door to door.  Schott’s leather jackets were lovingly branded with the name of Irving Schott’s favorite cigar – the Perfecto. By the mid-twenties, Schott NYC was revolutionizing the way Americans dressed for the outdoors when they were the first to put a zipper on a jacket. Eager to innovate, it was no surprise that Irving Schott then set his sights on another American classic in the making – the motorcycle. In 1928, they designed and produced the first leather motorcycle jacket. Retailing for $5.50 at a Long Island Harley Davidson distributor, the Perfecto was durable, rugged, and immediately embraced. 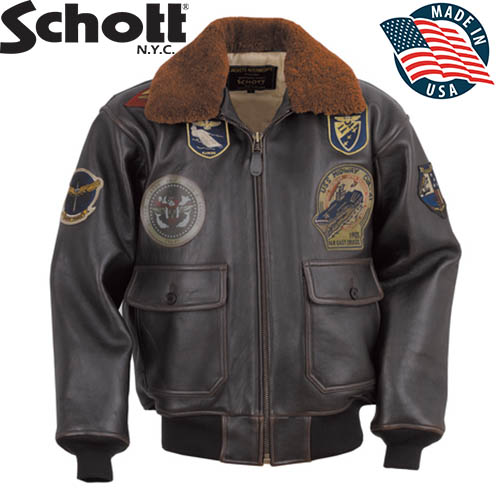 As the world descended into war in the 1940s, Schott was commissioned by the US Air Force at the start of WWII, Irving Schott designed and produced a “bomber jacket” that would serve and protect pilots and bomber crews and on deck, servicemen kept out the cold with Schott’s classic melton wool naval pea coat. Rugged and warm, these leather and wool jackets would be produced by Schott for the US Military for the next 60 years. In the years that followed the World War Two, actors like Marlon Brando and James Dean would come to symbolize the rebels that Schott had long ago helped create.

Now, over 100 years after two brothers began in a Manhattan basement, the world has grown smaller and digitized.  Schott, still run by the third and fourth generation, has continued to expand overseas where “Made in America” was revered and coveted. Peacoats, Duffle coats, flight jackets, motorcycle jackets, nylon outerwear, knits and sportswear became available worldwide as Schott NYC represented the heritage of America and the rebel inside everyone.  More importantly, though, Schott has remained true to their original ideas – craft a product out of the best materials and never sacrifice quality.