I know, I know, it’s been forever since I’ve posted and I promise, I haven’t been misbehaving.  To tell the truth, I’ve been stuck indoors too much since the weather has sucked in South Georgia for weeks.  100-degree days, humidity off the charts, and rain every afternoon.

So my bikes are clean, all the maintenance is done, and I’m climbing the walls to get out and ride.

Now, before this tropical depression set in, there were a few rays of sunshine though.  An old buddy from Atlanta called and asked me if he could bring down an ancient Kawasaki for me to do a little tuning on the carb bank and generally square his ride up.

Kurt and I were in the same Academy class a lifetime ago, so of course I said yes.

Two days later, he showed up with the most tired looking KZ 1100 I’ve ever seen – except I remember when he bought it, brand new, in Alpharetta in 1983.

Since I distinctly remember him selling that same bike twenty years ago, I was a little confused.

“The fella I sold it to rode the Hell out of it, but took pretty good care of it.  He gave it to his son and then, after another 20,000 miles, two overhauls, and five years of sitting in the garage, his Daddy said to call me and sell it back to me.”

And that’s just what he’d done.

So Kurt had bought back his first bike, but the years hadn’t been too kind.  The fairing was gone, the tank was rusty, there were Dirt Dobber nests everywhere and the paint, chrome, and seat were a mess (and if you don’t know what these insects are, then you’ve missed one of the joys of vehicle maintenance – picture a harmless wasp-like bug that builds a nest of mud that dry on – and in – stuff that doesn’t need bug nests).  The problem is that Dirt Dobbers like to build in places that don’t need mud, dirt and debris – like intakes, exhaust pipes, under fenders, and, of course, cooling fins.

Since the motor would turn over but not catch, Kurt had decided that it was easier to drop it off and have somebody go through it than to fool with it himself, so I got the call.  He’d handle the looks later, but to start, he wanted the bike to be mechanically sound.

To keep Kurt from cringing – because I know he reads this column – I’m not going to tell you all the gory details of how I started cleaning his bike up, but let’s say that Phase One involved my 3000 psi pressure washer.

Now, I told you all that to tell you this – once the crappy gas was gone, the Dirt Dobber nests were deconstructed, and I’d thrown a kit on the carbs, I still had to do some road testing … and that was when the “good timing” part of this post comes into play.

The Boss at The Bikers’ Den had just sent me a seat cushion to test.

Now, I’ve always prided myself on having an Iron Butt, but I hate cracked seats … there’s always a little bit of water that seeps out of the foam and makes it look like you just ran a special hot delivery in your drawers and that damn wet spot never dries, all day.  If it’s cold, then it sucks even worse.

One look at Kurt’s tired seat told me that my test subject had been delivered to me.

The Skwoosh worked perfectly.  Fit perfectly.  Kept the cracked vinyl from the seat from poking me in tender places. 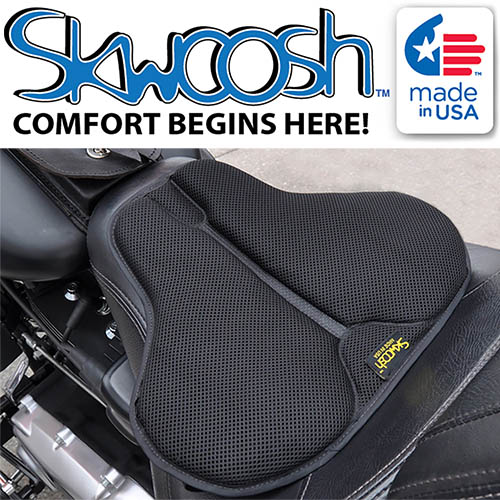 It strapped in under the horn of the seat and snapped on the sides, it stayed where I put it, and after nearly 250 miles of futzing around with Kurt’s tired old Kaw-dog, it ran really well and, honestly, the damn seat cushion was the best-looking thing on it.  Given the amount I rain we’d had, there were plenty of opportunities to get a wet ass, but actually, I didn’t even have that, either.

My take on the Skwoosh?

It does exactly what they say it will, and it does it really well.  Now, I didn’t stray too far afield on the KZ, but I was on it at least daily for two weeks and it felt good.  I liked it enough to order one for myself and while I may not use it every day – if South Georgia ever dries out – I’ll definitely use it on some of the longer trips I’ve got planned for the Fall.

If you’ve got a bar hopper or a hardtail and want to actually ride it farther than the next corner, you might want to think about one of these.  At the same time, for those of us with cruisers, I’m willing to bet if you give one of these a shot, you’ll find that long rides are a lot more comfortable.

I’m too damn old to worry about what other people think is cool – if I did, do you think I’d ride an old Sportster?