I made the mistake the other night of staying online too long and I ended up watching videos of weird people doing stupid stuff to motorcycles.  It would seem that in the online world, everyone has an idea – and not necessarily a good one – of how to custom build a bike.

Nevermind that there’s only so much you can do to an object with two wheels, an engine and a gas tank.  Chrome it, paint it, and make it go fast OR, if you don’t like chrome (or you’re too cheap to have it done) you can paint the whole thing.

Why are so many folks “reimaging” a motorcycle?

The worst, by far, are the people trying to make a bike into a “rat rod” – whatever that is.  To me, the entire idea behind “ratting” something is to take multiple pieces of crappy stuff that should’ve been recycled two generations ago and welding it together.  It “sort of” works with ancient passenger vehicles whose lineage you cannot quite define but painting a bike flat black and cutting off the exhaust 6 inches from the head doesn’t make it a rat rod, a café racer, or anything else useful.

I know, in a world filled with hardtails and bar hoppers that all look the same, yours is different.

Look on YouTube, or eBay, or in your local Craigslist.  Their pages are filled with broken bikes that someone tried to “customize” with no knowledge and no budget.  The end result is that these pissants have taken bikes that were structurally sound but, maybe needed a motor, and made them functionally unsafe and unreliable and guess what?  They still haven’t saved the coin to put in a motor.

They just trashed fairings, cut off turn signals, cobbled together an LED brake light mounted on the side of the rear hangers with butt connectors, and now they think they’re Orange County Choppers.

Some of you remember last year when I blew apart the motor and I had to sink some money into my bike quickly.  I documented the build in these pages and while my ancient Sportster is far from a pristine example of what Mother Davidson was building in 1994, I’ve taken the time and built the bike to be safe, ride well, and stop better than it did in the factory setup, and every bit of it was done with the idea that I’ll do it one time and not have to half-ass build something to “fix” what Harley had already designed. 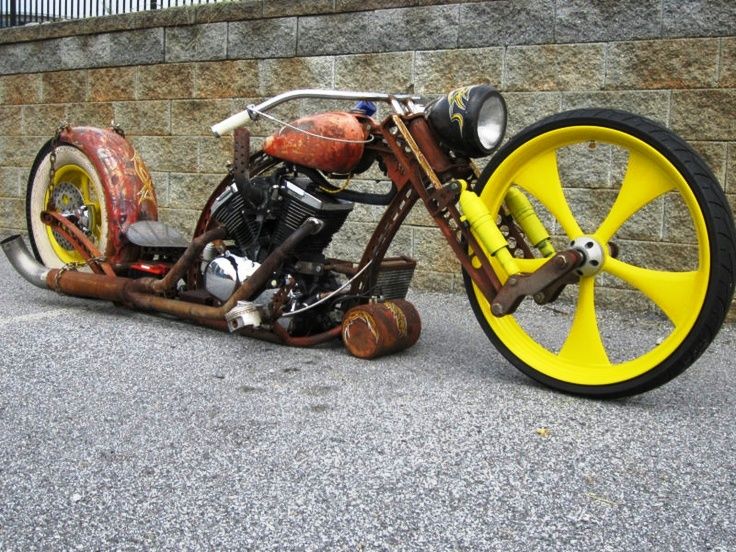 So if you’re thinking of buying a “project” bike, don’t do it unless you have the budget and the knowledge to do it.  One of the things that make old bikes special is to look at one that has been well cared for and survived all the terrible fads that have taken place over its lifetime.  Ape hangers, chopping, Evo motors, chrome, hard saddle bags, and a host of other things all speak to certain times and places.  Stripping that off and half-assing a restoration because you got the bike cheap only make project bikes more expensive for the rest of us.

Ever seen an original battery box for a 1980 Sportster?  Guess what, so many folks tossed them in favor of chrome that now they’re rare as hen’s teeth.

If you want to step up to the project, then step up – know what you’re doing – or at least be willing to learn – and let this idea guide you:  You aren’t the owner of a special bike, you’re the caretaker of it.  Your job is to make sure that it lasts for the next person in line.

In other words, make it better than it was, not necessarily different.